IF YOU ARE WORRIED YOU MAY HAVE A SUBSTANCE ABUSE PROBLEM, PLEASE SEEK TREATMENT.  IT IS A SERIOUS DISEASE WITH SERIOUS CONSEQUENCES.  ALWAYS REMEMBER I AM NOT A DOCTOR AND THIS INFORMATION IS GIVEN FOR INFORMATIONAL PURPOSES ONLY.

When you first start to lose weight, one of the most common pieces of advice is to completely eliminate it from your diet, that it does nothing for your health, and will only serve to stall your weight loss.  However, what if alcohol actually was not as bad for you as is often described?  And what if even more shockingly alcohol was associated with a lower incidence of obesity?

There is a common refrain that alcohol is a poison and that anyone who drinks it is in some way poisoning their body.  In someways they aren’t wrong because alcohol is processed by your liver first into acetalaldehyde which is very toxic and also a carcinogenic.  It is then broken down into acetate which is then oxidized by the various cells of the body.  Now because of the fear our society has around the word cancer, hearing that may already have you rethinking your nightcap.  However, the true story seems to be much more complicated.

Alcohol is generally listed as ~7 calories/gram, making it one of the most calorie dense items we consume behind fats which are ~9 calories/gram.  This again makes it seem like cutting it out would be a great way to help accelerate weight loss, however again it seems to be a little more complicated than we thought.  There is an effect called the TEF or the Thermic Effect of Food, which is the amount of energy burned in the metabolism of that food item, and ethanol (alcohol you drink) has a surprisingly high value.  There is some evidence to suggest that due to the metabolic increases that occur after consumption of alcohol the actual value is actually about 20% less. (Suter et. al 1994)  This means that our body does not very efficiently process alcohol.  This is actually further strengthened by another observation.  De novo lipogenesis, is the creation of fats, “from nothing”, meaning from the elemental basics.  De novo lipogenesis for ethanol is also shockingly low at less than 5%.  That means that only 5% directly goes to the formation of fatty acids.  However, just to be clear getting calories from alcohol can still contribute to slowed weight loss, but this seems to be due to a decrease in fatty acid oxidation (due to the acetate we talked about before). (Silver et. al 1999)  This seems to suggest that drinking alcohol may not contribute to the fact gain we are all trying to avoid.  There is even evidence to suggest that isocaloric substitution of carbohydrates with alcohol actually causes first a sharp drop in weight, and then a gradual decline in weight. (Lieber 1991).  This study was done in metabolic ward situations, and thus should be quite accurate.

You may still read that and believe that there must be some kind of link between alcohol and obesity.  Well let’s take a moment and analyze that.  The studies actually seem to suggest that moderate alcohol consumption may actually protect against obesity (especially in women).  To figure out what this means for us, we first need to figure out what the hell is meant by moderate.  And it seems to be at most a couple of drinks in a day.  The traditional college frat guy drinking does not apply in this scenario.  However, it does seem to hold that moderate drinking helps protect against obesity.  The mechanism for this is oft-debated however.  It seems to be at least partially that those who are likely to choose to drink alcohol in moderation are likely to also eat in moderation.  What is important to us however, is that moderate alcohol consumption is not linked to obesity, and thus if the goal is to lose weight we do not necessarily need to cut it out.  (Yeomans 2010) 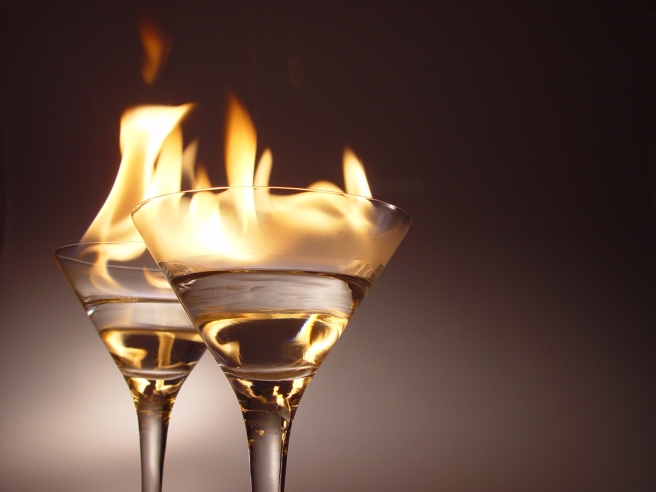 Another interesting thing to consider in the American health crisis is the prevalence of Type 2 diabetes.  This is a disease that has reached truly incredible proportions and anything we can do to try to prevent this disease deserves some consideration.

First of all we need a little bit of background on how Type 2 diabetes develops.  When you consume food (especially carbohydrates) your blood glucose increases.  Your pancreas detects the elevated blood glucose levels, and it produces insulin.  Insulin drives glucose into cells (especially muscle and liver cells).  In the liver and muscle cells, glucose can be converted to glycogen, which is your body’s method of storing glucose for later use.  Glycogen can be accessed when blood glucose levels fall to provide energy.  When blood glucose levels are elevated for too long, (often due to overconsumption), your cells can eventually develop insulin resistance.  When this happens the pancreas needs to produce more and more insulin to get the glucose out of the blood.  If insulin levels get too high, it can start to damage cells, and if it damages the beta pancreatic cells it then becomes harder for the pancreas to produce the needed insulin.  This is when type 2 diabetes can become irreversible.

What this means is that if there was a way for us to increase insulin sensitivity, it could help prevent type 2 diabetes, and would likely mean diabetics would not necessarily have to give up alcohol.  The incredible thing is that it does seem to promote insulin sensitivity!  There was actually a relatively large study done on over 1,000 Japanese citizens that seemed to show that alcohol improved insulin sensitivity, and that even more it was dose dependent, meaning the more they drank the stronger the effect!  (Arima et. al 2002)  This seems to suggest to us that alcohol in some form modulates the effects of insulin.  There is of course a question as to how this effect persists in different populations.  There was a much smaller study done on post-menopausal women that found moderate alcohol consumption was linked to increased insulin sensitivity.  Fasting insulin concentration was reduced by almost 20% after two daily drinks.  (Davies et. al 2002)

There is some question as to how this reduction happens WARNING MORE COMPLICATED SCIENCE FOLLOWS and there is at least one current reigning hypothesis.  There is an enzyme in the human body called AMPK it is responsible for phosphorylation of various other enzymes.  This phosphorylation can either activate or deactivate a variety of different enzymes and metabolic pathways in the body.  There is a theory that activation of this enzyme, by ethanol, can then activate the mTOR pathway, which in term can contribute to several of the health benefits.  (McCarty 2001)  But overall it looks like alcohol could potentially be a part of a healthy diet for people who are worried about diabetes.

With all of the negative press that alcohol gets it would be very easy to believe despite what I have already detailed that it would contribute to an earlier death.  Aren’t you clever? Trying to find the flaw in my reasoning.  And you know what? It turns out you’re right.  If you drink enough it does increase your chances of dying.  However, moderate drinking is actually associated with a lower risk of mortality.  So it turns out that again, drinking in moderation is even better for you than not drinking.  And even heavy drinking >=2 drinks per day was not associated with an increase in mortality! There’s lots of things in this world that are likely to kill you, but it may turn out that alcohol is not one of them. (Gaziano et al 2000)

Okay at this point you have to be waiting with bated breath to see what the catch is.  Perhaps drinking makes you more likely to catch a cold? Well….moderate alcohol consumption is actually associated with a lower likelihood of infection…(assuming you are a nonsmoker).  Alcohol has been shown in at least in one study to decrease the likelihood of infection by the common cold. (Cohen et al 1993)

We’ve all seen drunk people do some really dumb things.  There is no way that alcohol is good in any way shape or form for your brain.  That would be completely absurd.  It would mean so many of the ideas we have held are inherently flawed.  Well it turns out… that alcohol consumption is associated with a lower incidence of dementia.  And this effect seems to hold up to about three drinks per day.  However, there is a catch, heavier alcohol consumption is associated with an increased risk of stroke.  However, moderate drinking is still associated with a lower incidence of dementia.  (Lettenneur 2004)

There is a general conception that alcohol is often used as a form of escapism for people who are trying to escape from stress, and this is generally not considered a healthy behavior.  And that is true, you should not depend on alcohol in order to deal with your issues in your life.  If you are in that situation, then it would likely be helpful to seek professional assistance.  However, moderate alcohol consumption has been linked to lower incidences of depression in the presence of stress.  It seems that alcohol consumption may serve as a relatively socially acceptable way to handle stressful situations.  However, this effect did not persist with heavy drinkers.  (Lipton 1994)

Cancer is one of those cases in which there does seem to be a connection between drinking.  Heavy drinking has been linked to approximately a 30% increase in certain cancers. (Gaziano et al 2000)  However, there do seem to be some interesting exceptions.  There was a cohort study done on Swedish women that showed moderate drinking was actually linked to a lower incidence of renal cell carcinoma.  This suggests that certain types of cancer can actually be decreased by the consumption of alcohol.  (Rashidkhani et al 2005).

This is not to say that alcohol is some miracle substance.  It is still associated with an impressive amount of liver diseases.  It is still an addictive substance, that runs a distinct risk of damaging people’s lives and relationships.  Just remember that in moderation it does seem to have certain health benefits.

I need to give credit to Martin Berkhan the author of http://www.leangains.com/ he has done impressive research on a variety of topics including intermittent fasting and alcohol.  Check his work out.  It’s excellent work.

Add me on any of these.  I want to make my process as accessible as possible so that people understand what goes into it.

Lipton RI. 1994. The effect of moderate alcohol use on the relationship between stress and depression. American Journal of Public Health 84:1913–1917.

Rashidkhani B, Åkesson A, Lindblad P, Wolk A. 2005. Alcohol consumption and risk of renal cell carcinoma: A prospective study of Swedish women. International Journal of Cancer 117:848–853.

3 thoughts on “Alcohol and your Health: The Boozy Truth”